Dark Traits Personality Test – a Must Have in Pre-employment Assessment

The scope of candidate evaluation during the recruitment process has evolved over the years. A decade ago, importance was given only to job-related skills and competencies. Recruiters are now looking at a holistic candidate evaluation rather than evaluation of job skills alone. Employers are now looking at hiring employees who not only perform well at the job, but are also able to fit into the work culture and environment. Assessment of soft skills becomes important for determining whether the candidate is capable of managing challenging work situations. The dark core personality test offers vital insights into the behavioural traits of the candidate when faced with stressful or challenging situations at work.

What are the Traits of Dark Personality?

What is the cause of a dark personality? Dark or toxic traits often emerge from placing one’s interests above that of others and justifying the actions to avoid guilt or shame. The study of dark personality is useful in clinical, criminology, and workplace settings. The truth is that all of us possess dark or toxic traits in varying degrees. When positive traits override the dark traits, a person does not exhibit toxic traits and is able to control his/her reaction to challenging situations. When the dark traits override the positive traits in a person, toxic or unacceptable reactions occur.

A person with a higher predisposition to dark traits is more likely to display them. These traits are triggered under unobserved and stressful environments. Not only does the display of dark traits create a counter productive environment at work, but also triggers interpersonal issues for the employee.

Here are some of the incidents caused by a display of dark personality traits:

These instances of dark personality behaviour have given rise to the need for employees to assess employees thoroughly to understand their personality, characteristics, dominant dark traits, and motivations. The dominance of dark traits can lead to life-threatening outcomes especially in jobs concerning child and healthcare. Even in corporate jobs, employees displaying dark traits can disrupt the work environment and cause irreparable damages to project work.

What is the Dark Triad Test?

The dark personality test is a psychological concept that has been recently introduced in hiring circles. The dark triad test was popularized by 2 psychologists Paulhus and Williams in the year 2012. As the name suggests, this focuses on the 3 dominant dark traits that are believed to exist in everybody in varying degrees. The answer to how dark is my personality can be deciphered through the dark core test. 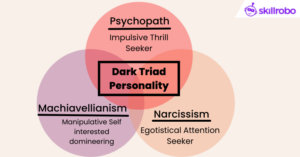 Machiavellianism: this trait involves duplicity, manipulation, self-interest, lack of emotion and morality. This trait has been named after the Italian diplomat Niccolò Machiavelli, who was involved in fraud, deception and manipulation. A good example of Machiavellianism is when a coworker who acts particularly friendly with you and gives you disastrous advice that could potentially get you fired. People who score high in machiavellianism are known to use flattery, cheating, lying, and exploitation to get their way.

Narcissism: boastful, arrogant and selfish individuals that lack empathy are categorised as narcissists. The most apt way to describe narcissists is people with an exaggerated sense of self. They are under the impression that they are superior to others and constantly expect praise, recognition, and attention. Self-centred thinking, lack of consideration for others, expecting social favours, and a feeling that the world revolves around them are classic traits of narcissism.

Psychopathy: people that lack empathy and remorse and display antisocial, criminal or volatile characteristics are categorised as psychopaths. Having very little total lack of empathy is a trademark trait of psychopaths. Lack of guilt or remorse, shallow behaviour towards others, involvement in risk work, highly impulsive behaviour, and finding it difficult to maintain relationships are classic traits of psychopaths.

Why should you test for Dark personality?

Not only during the hiring process, it is important to assess existing employees for the presence of dark personality traits to ensure that they don’t create a toxic workplace. The core personality test must include the dark triad test to prevent hiring of individuals that may cause potential harm to the organization. As per research, hiring a new person or replacing a bad hire is a costly affair for the organization. Negative workplace behaviours may have detrimental consequences on the performance, culture, reputation, and profits of the organization.

How to Use the Dark Personality Test

The dark personality trait can be used to improve the workplace. Negative workplace behaviours can affect the organization’s culture badly. The most important step is to acknowledge the need to measure these traits and their severity both at the time of hiring and within the organization to mitigate the detrimental effect. The recruitment team must adopt proactive measures in identifying these traits to build a productive and positive work culture. The HR manager must look out for specific roles or areas where these traits cause maximum damage and ensure that dark triad tests are in hiring for such roles.

Here are some areas where dark personality tests can be very useful and effective:

At the time of hiring: candidates with dark personality traits can be categorised as bad hires, owing to the damage they cause to the work environment. People with dark traits need to be observed keenly to make out these traits. More often than not, these traits are overlooked at the time of interviews. Pre-employment tests are effective ways of evaluating the overall personality of the candidate. Including the dark personality trait test in the pre-employment assessment is highly effective in identifying such candidates and filtering them out in the hiring process.

For creating strong work teams: knowledge of these traits can help build teams that complement each other. Team members can be paired such that the dark personality trait of one person is nullified or complemented by the other.

Employers are looking beyond just job-related skills to hire candidates that fit well into the culture fabric of the organization. Dark personality traits in potential hires or employees can cause irreparable damage to the organization. Including a dark core personality test in the pre-employment hiring process or making it a part of the employee appraisal system helps identify people with dominant dark traits like Machiavellianism, Narcissism, and psychopathy. SkillRobo is an online pre-employment skill assessment software that is specifically designed to evaluate behavioural and personality traits of candidates, in addition to core competencies and job skills.

Ensure that you make the right hiring decisions with SkillRobo. Sign up for the free trial to explore quick and effective hiring. 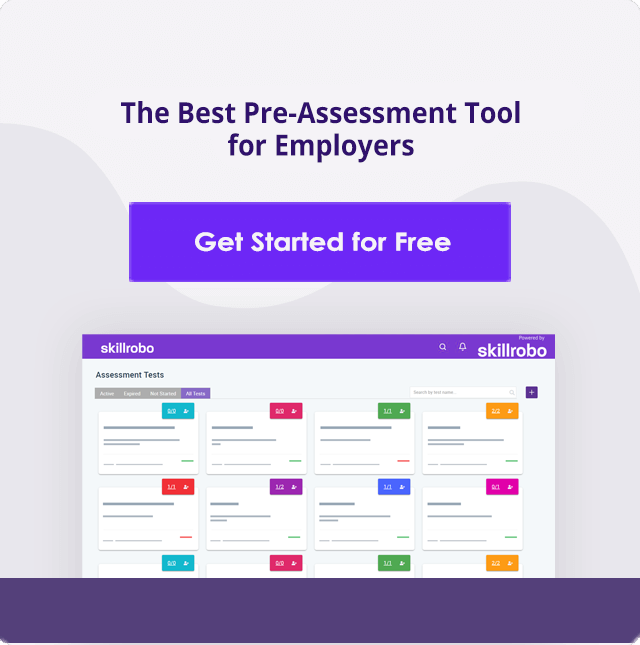